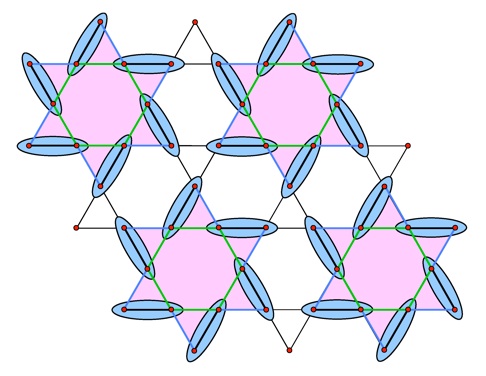 An electron is a magnet. However, the magnetic moment of the electron can take only the two states, up and down, which is in contrast to the real-life magnet which can have any direction. This degree of freedom, up and down states, is called "spin". When the two spins interact with each other antiferromagnetically, surprisingly they couple, and disappear (formation of singlet). In strongly frustrated lattice as kagome lattice, this coupling cannot be formed trivially; up spin cannot select which down spin to couple... Consequently, the singlet state starts to move around the lattice; the resonating-valence-bond state. When a weak breaking of the complete frustration is introduced, the singlet solidifies, resulting in the valence-bond-solid state. Of course, the spins hide themselves by forming singlet pairs, so they are not easy to be seen experimentally. We, a team from ISSP, Tokyo Tech. and Tokyo Univ. of Science, uses neutron scattering to "see" the hidden state by exciting the singlet ground state into triplet excited state. In this experiment, we confirm the pinwheel VBS state in the model kagome antiferromagnet Rb2Cu3SnF12. This result is published in Nature Physics on 2010/09/12. Detail in Japanese can be found elsewhere.